Two rescuers named Hector and Georgia drove out to Louisiana to lend a helping hand. Shelter volunteers needed to evacuate their animals due to a recent flood.

Over 500 animals were evacuated. They needed help, so Georgia and Hector went out to see what they can do. The two rescuers were also planning to bring around 30 to 40 animals with them that they can help get adopted.

Hector would the one assessing these animals. He will check which of the animals were okay to be transported. If any dog needed surgery, he would also be bringing them back to their clinic to get operated on.

One animal, in particular, is a dog named Baldwin. Baldwin has a broken leg that healed badly. No muscle developed in the affected area, which made it very difficult for Baldwin to move around.

Hector is hoping to bring Baldwin back and get him operated. After checking the dog, he needed to check the others. He went around the barn to check each one.

After touring the entire barn, Hector and Georgia loaded up their truck with 20 dogs and 12 cats. They will be bringing these animals back to Denver.

Among the dogs that they brought back with them were seven puppies with ringworms. These puppies were given sulfur baths for their treatment when they got to Denver.

When Hector and Georgia found these puppies, they were heavily malnourished. After a few weeks under Georgia’s care, they have completely transformed.

The two rescuers were very happy by the puppies’ transformation. They were very glad that they decided to bring these puppies along even with their condition.

They gave the puppies a chance, and the puppies now have a bright future ahead of them. The two rescuers will do the best they can to find these puppies homes.

Since they are very adorable, it will not be a difficult task. Hector is even hinting that he might adopt one or two.

There’s strength in numbers, as the famous saying goes. A … 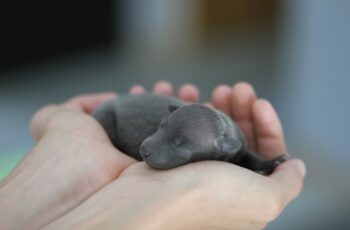 Three little collie puppies were recently found inside a plastic …